On 8th October the band continued their concert series ‘Tendring Brass on Tour in Tendring’ with a great concert held at Great Bromley Village Hall.

Playing to a packed hall, the Band commenced the first half of the concert under the direction of our talented Assistant Musical Director – Mr David Rowland, opening with ‘The Spirit of Brass’.The Band then went on to play a variety of well known pieces from films and shows including a cornet and euphonium duet featuring Lee Caffell and Guy Lever playing ‘All I ask of you’ from Phantom of the Opera. The audience was then further treated to another duet, this time played by Ellie Bould and Chloe Jay who brilliantly played ‘I know him so well’ on cornet.

The Band’s Musical Director, Mr Antony Sanders, contributed to a great first half, by playing a euphonium solo ‘The Holy Well’ before a well deserved break for the Band when the audience enjoyed tea and cake !

Antony conducted the second half of the concert continuing the film and show theme. Again the half included great solos by Hannah Rose, playing ‘Over the Rainbow’ on her Tenor Horn, and Rebecca Smith playing ‘Misty’ on her Flugel Horn.

The afternoon concert concluded with the rousing ‘Hootenanny’  – leaving the large audience to depart with a spring in their step.

A great afternoon in the countryside making great music and a host of new friends. 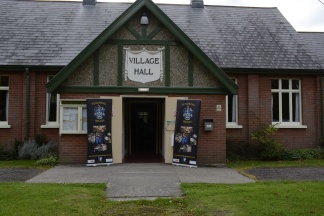