Discovering Tendring’s Home Guard Defence
Tendring Brass proudly supported a local event last Saturday (23rd June 2018) in Great Oakley by sending eight players along to add some music from the WW2 period. The event entitled “Discovering Dad’s Army” included WW2 Home Guard memories, re-enactors and talks. It was mainly held at All Saint’s Primary School in Great Oakley but then at 2pm the crowds moved along the road to the pill box in the front garden of Apple Tree Cottage in the High Street where John Jowers, Chairman of Essex Heritage Trust unveiled a new information board fixed to the side of the pill box.
Great Oakley was on the major route from Harwich to London in the 1940s and it was expected that the enemy would arrive by sea at Harwich. The pill box is the only remaining part of an anti-invasion road defence barrier installed in the village during World War 2. Steel cables were attached to the pill box and then across the road to a large concrete block the other side to stop any tanks so as to delay the enemy’s approach to London. The pill box was one of a number of military defence systems manned by the home guard in Great Oakley. There were also oil drums filled with petrol buried in the roadside, a Nissen hut, a spigot mortar position and a 25 pounder gun at an empty house. In the centre of the village was another pill box disguised as a cafe and painted green and cream with wooden shutters.
The brass octet played half a dozen songs from the wartime era finishing with the theme tune from the TV comedy “Dad’s Army” and the music was well received by a large crowd on a very warm and sunny afternoon. 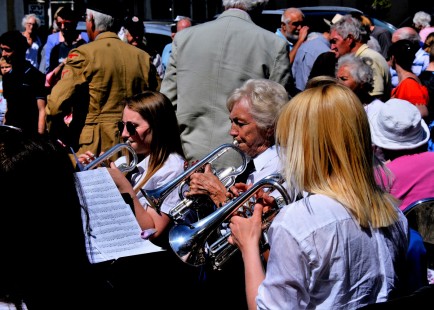 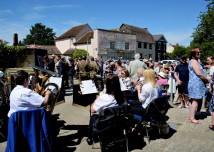 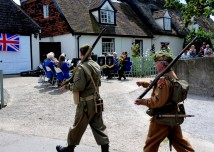 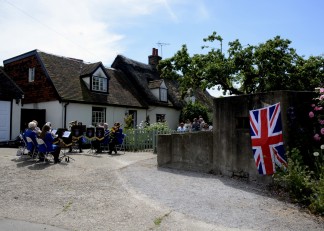 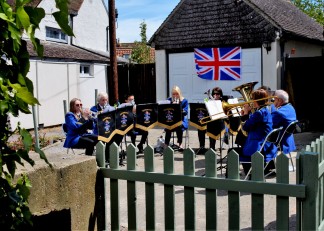