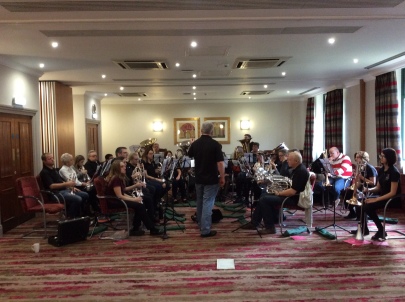 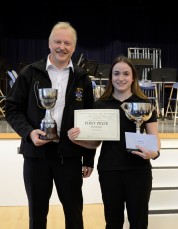 On Saturday 17th November the Band travelled up to the Leicester area for an overnight stay prior to participating in the Leicestershire Brass Band Association Open Brass Band Competition the following day.

After an evening rehearsal, food, (& drink!) socialising, and a nights sleep the Band were ready for a last minute practice before travelling to Loughborough Endowed School, the venue for the competition.

The Band were entered in the Third Section competition, playing  a Goff Richards piece entitled ‘Oceans’.  There was stiff competition from a number of oither bands from across the country, each being judged by the adjudicators  Mr Steve Pritchard-Jones and Mr Gordon Eddison.

At the end of the competition, members of the band waited patiently for the results and were rewarded with the announcement that the Band’s Euphonium player Guy Lever had won the Enigma Challenge Cup for the best overall musician – a fantastic achievement – Well done Guy !

The Band were then kept in suspense before the winners were announced – Tendring Brass ! – the hall erupted with cheers as band member Chloe Jay went up to receive the Co-op 150 Challenge Trophy, a certificate and cheque. A great result and reward for all the hard work that the band had put into preparation for the competition.

Special thanks to our MD Antony, for his hard work leading up to the competition and to David Johnson, who recently led a Band Training weekend, and to Craig Sanders who helped at the competition – Thankyou.